Campus in the making, popping up in Myllypuro
Back to Blog

The Myllypuro Campus of Metropolia UAS is gradually starting to rise above the ground – is it possible to start building up the communication and campus community already at this stage? This question was explored with the Pop-up Metropolia Campus, which took over an empty space on the corner of busy Myllypuro Mall, filling it with the information, activities and people of future campus for two weeks in May 2017. 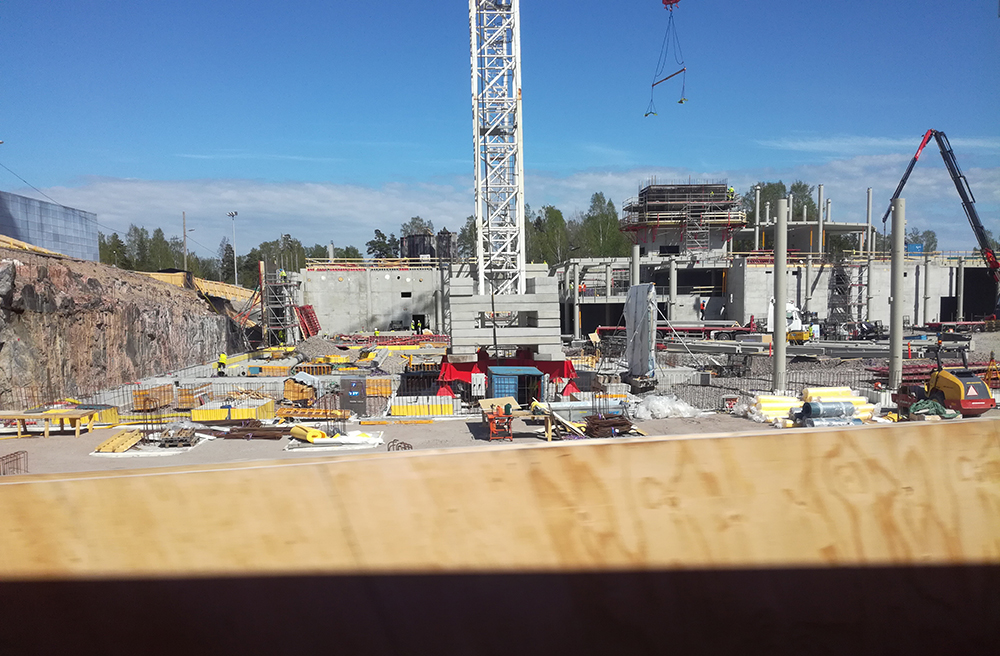 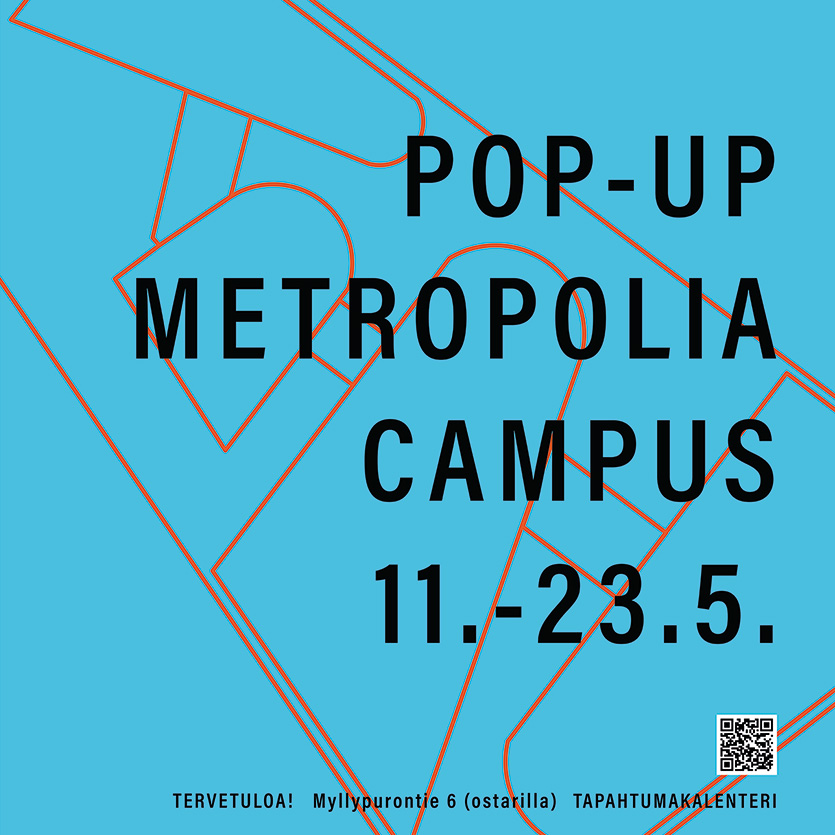 From the very beginning it became clear, that the future Myllypuro campus is eagerly expected. The people took contact to find out what was happening already, when we were cleaning windows and – upon learning our purpose – warmly welcomed us to the neighborhood. The simple things and details were the most popular questions, starting from the student number and fields of study hosted, to the square metres and number of floors within the building. Many were especially pleased with learning about the wellbeing services provided by students.

The pop-up programme consisted of different types of formats and sessions:

The opening party was relaxed get together of Myllypuro residents and Metropolia personnel and students and gathered around 50 participants over some food, coffee and guitar music. The exhibition about campus plans, services and activities as well as future plans for the area was also first introduced to the viewers. 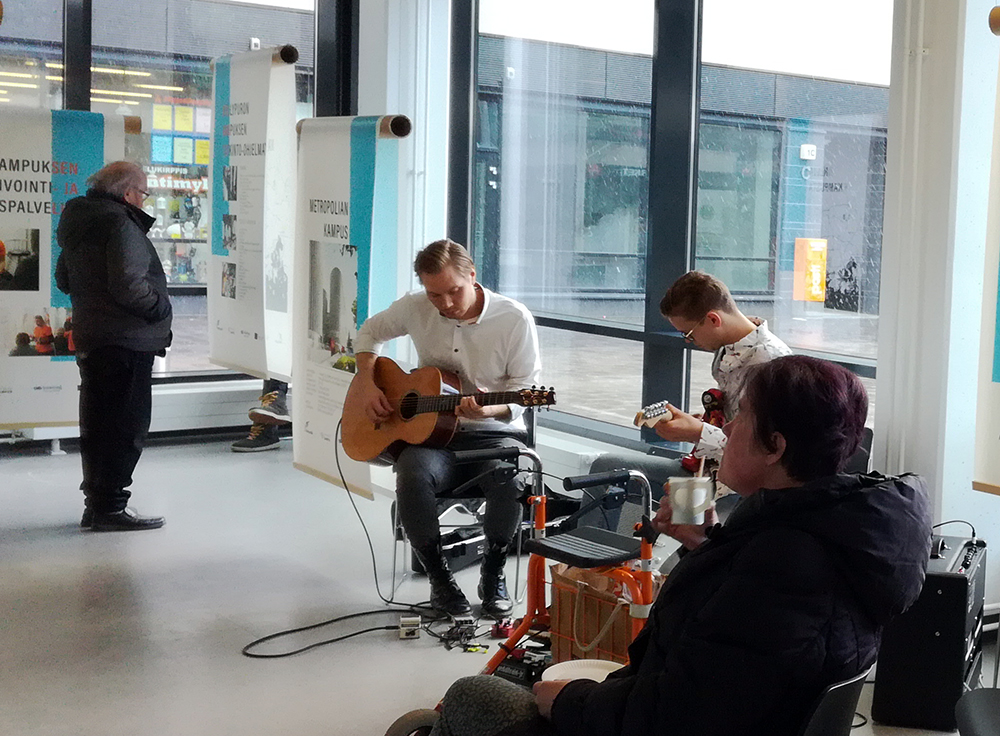 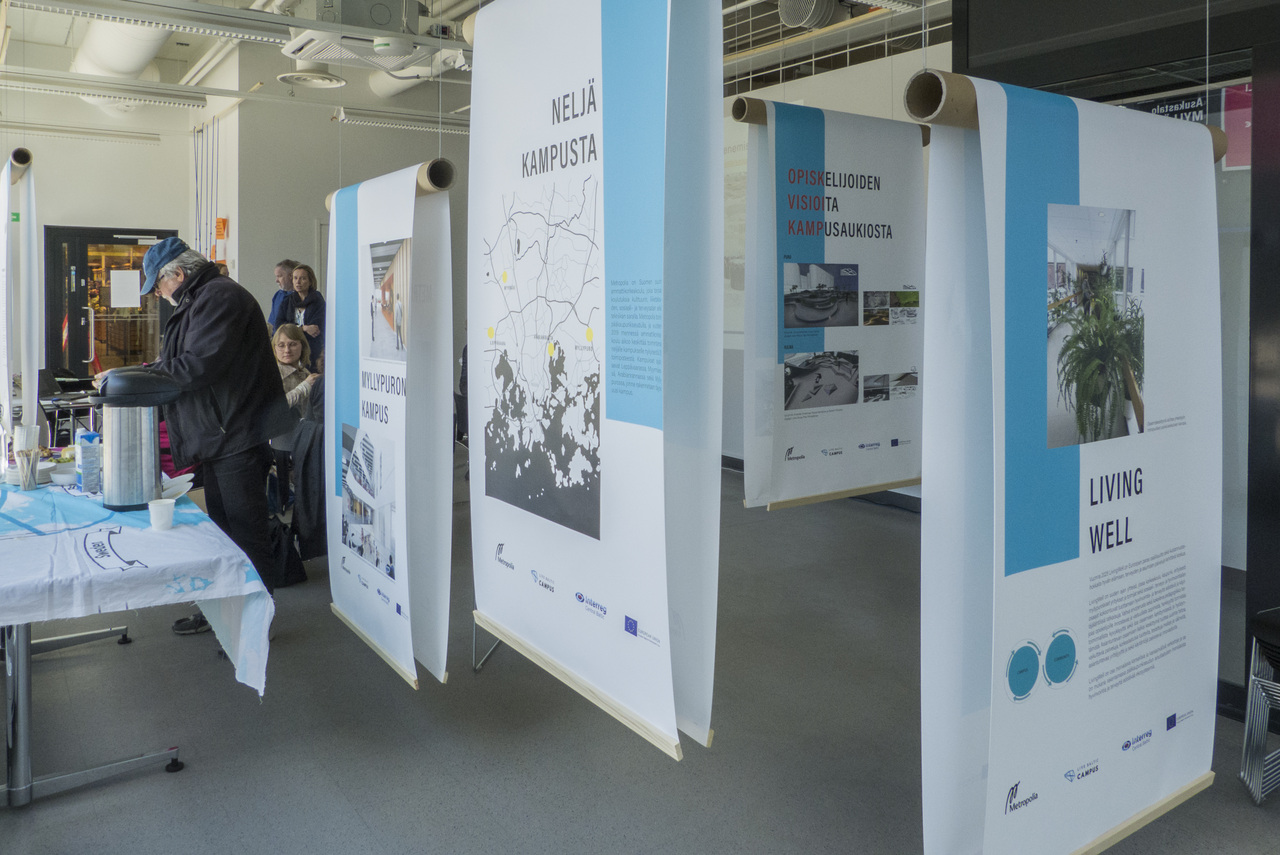 During the pop-up weeks the services of Metropolia – such as admission services, library and services supporting immigrants’ higher education – presented themselves to the locals. Some practical revelations and ideas came out of these encounters: for example the campus library will need a magnifying glass for the newspaper section. On the other hand, surprisingly many of Metropolia’s staff members confessed that this was the very first time they visited the area.

A couple of sessions were done simply by relocating the regular staff meetings and workshops to the pop-up space. These sessions received the most mixed comments from the participants. The space was seen as bit distant from current work locations, and also for some it was to come by due the lack of the official Metropolia visuals. Nevertheless, many also commended the opportunity to stay in the middle of the Myllypuro. The space was also used to collect data from the residents for ongoing RDI projects – a potential first step towards approaching campus surroundings as a test-bed for developing services. 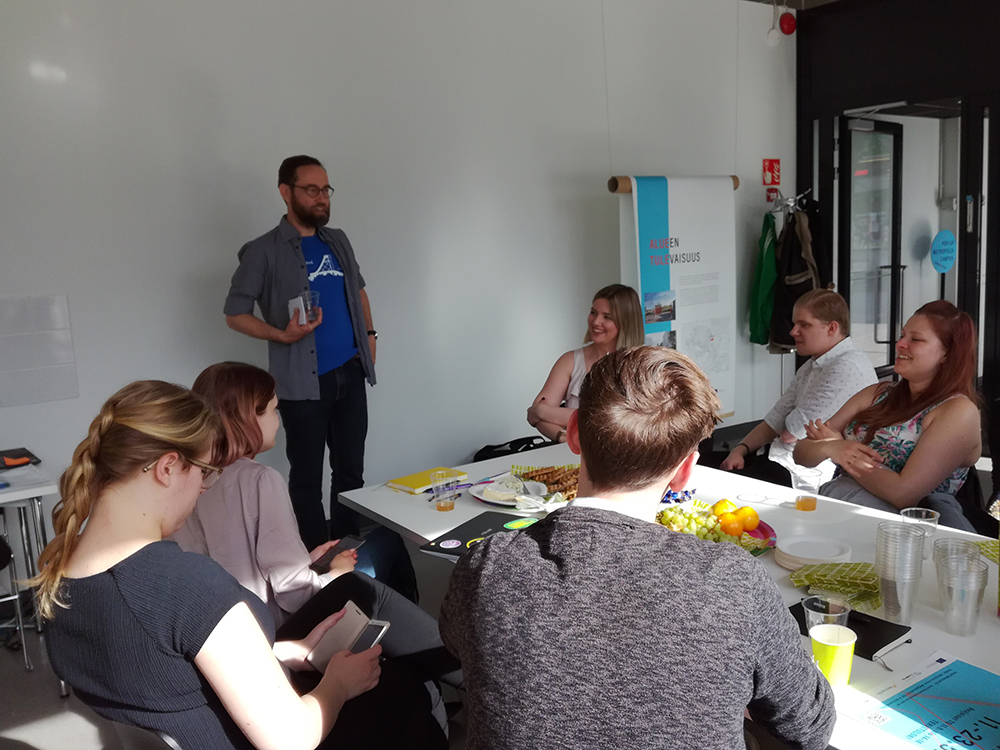 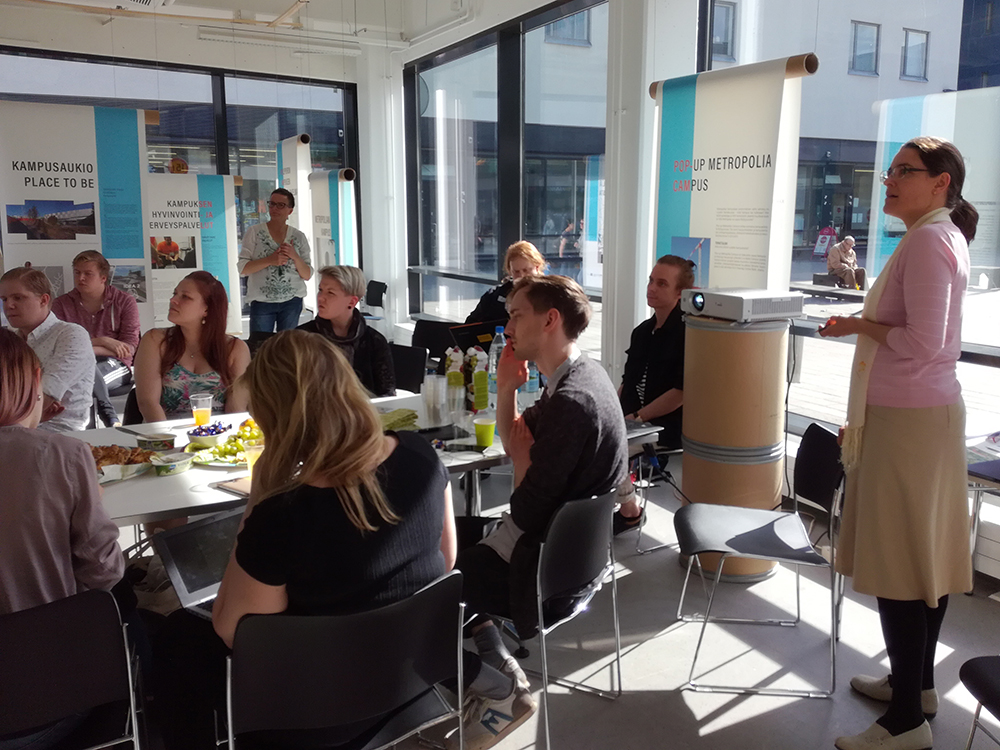 The best moments, however, all entailed connections that sparked between the people of Metropolia and Myllypuro, as well as the City of Helsinki officials. Part of the student union’s evening debate forged into a dialogue of shared interests with Myllypuro Resident’s Association. Some very concrete synergies emerged, starting from the knowledge of best slope for sled riding on Laskiainen (mid-winter sliding festival on Shrove Tuesday) and to the possibility to hire cultural management students as licensed security officers for neighborhood events (a task which is a required by the new Finnish legislation).

Also some concerns were voiced in the afternoon session with City of Helsinki Architect Mikko Näveri, Campus Director of Metropolia Simo Hoikkala and Myllypuro residents. The questions of how much congestion will 4500 students and staff members create in the metro and bus stops as well as the concern over the adequacy of number of parking lots seemed to occupy the minds of more than few of the locals. 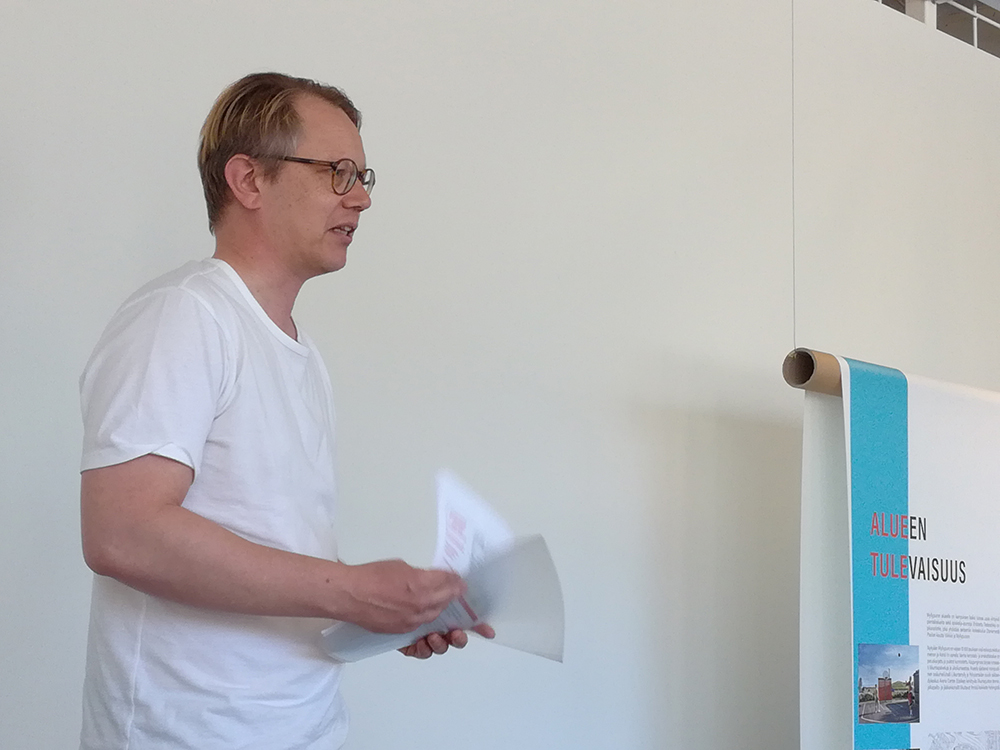 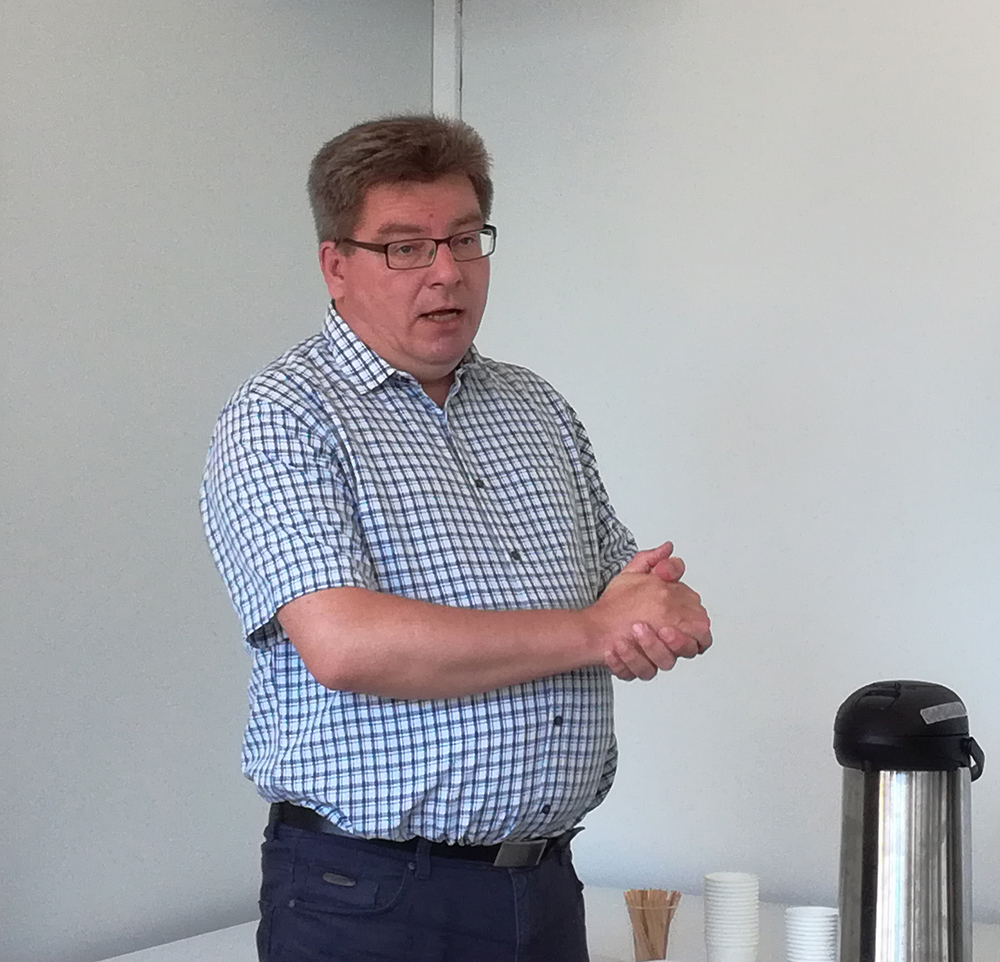 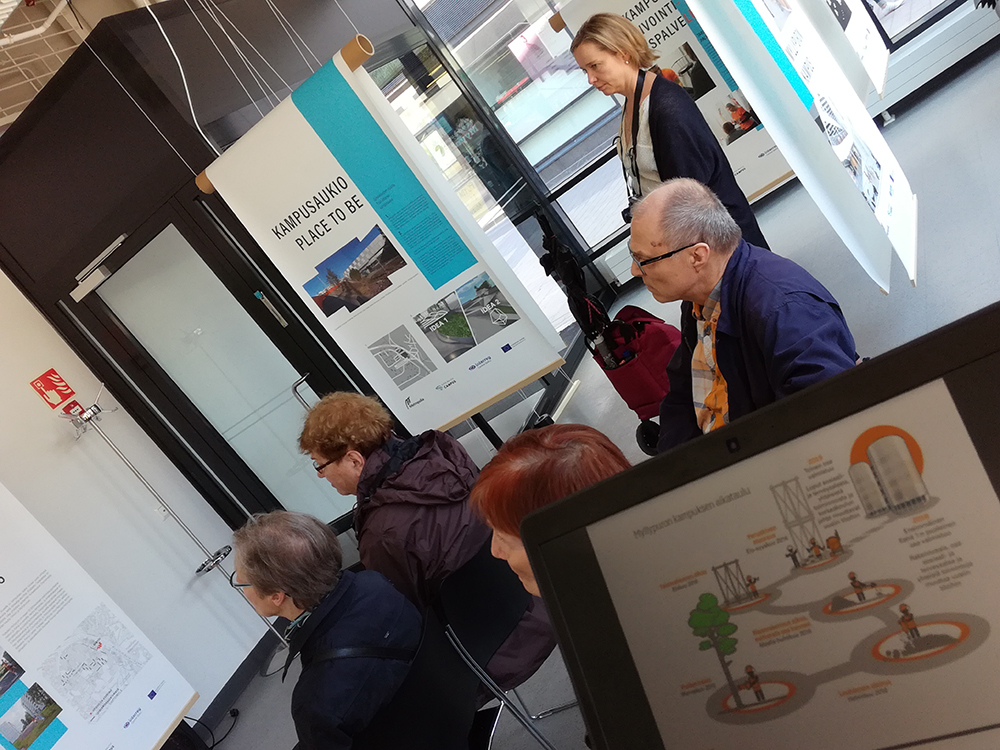 The pop-up was also very much about contesting the prejudices; even today Myllypuro still suffers a bit of the negative image, which does not really have much base in the reality. Meeting people and getting to know the area is a way to overcome this and also something that needs to be done before further steps can be made in joint process of building the campus community. The Pop-up Campus can work as a forum for taking this first step as well as for collecting the inputs and ideas for the continuation of the journey together.

During the pop-up days, it was noted that Myllypuro campus has thus far mainly been communicated as a construction project in the neighborhood. Thus the people of Myllypuro have not been quite able to know what to expect from the future. The campus, however, embodies potential far beyond the building itself and the next action could well be to organize for a residents evening to discuss the campus as a service and from the community perspective. From the pop-up experience it is clear that the campus will provide a vast amount of opportunities and that there truly is a positive and expectant attitude towards welcoming it. To continue on the path of integrating the campus and neighborhood similar encounters continue to be needed, and discipline of design can continue to provide tools for creating their settings. 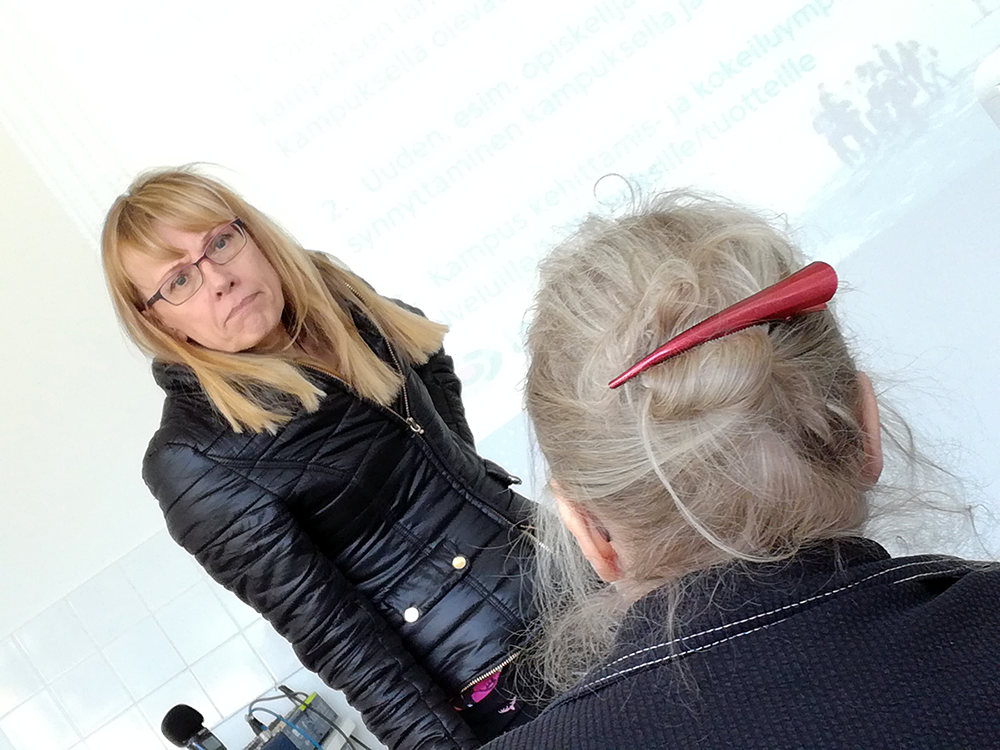 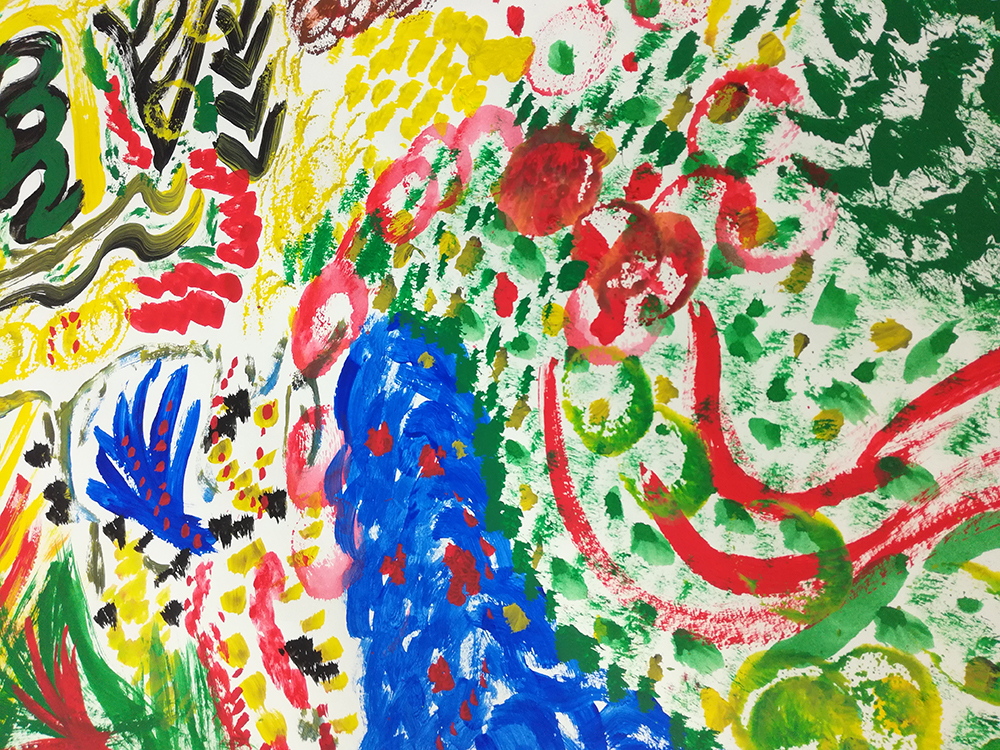 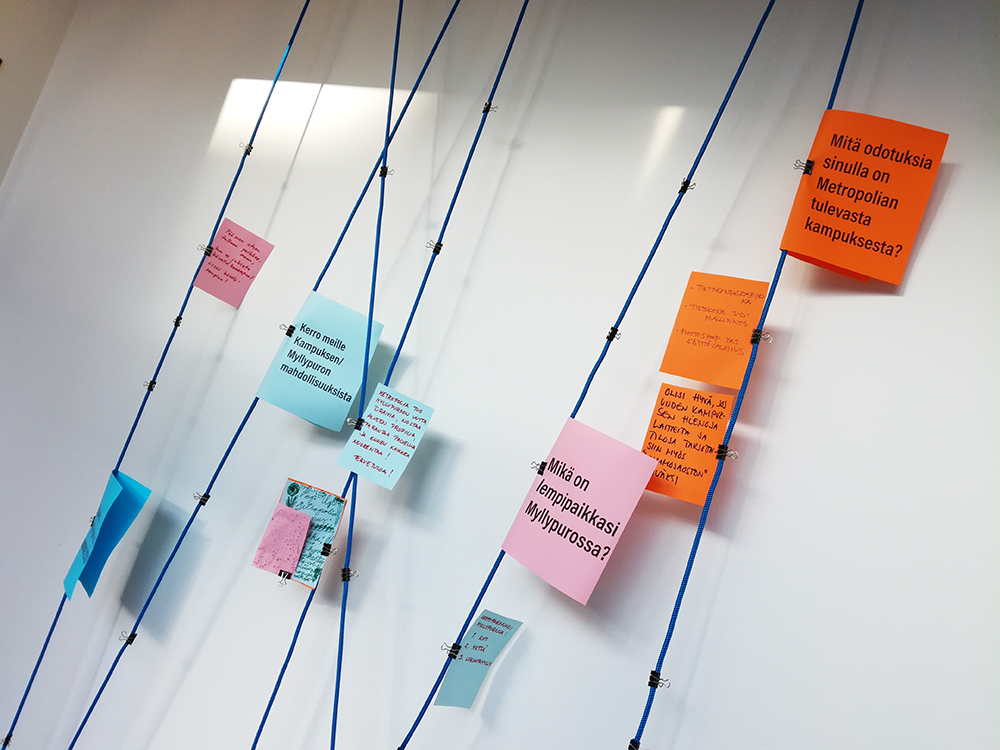 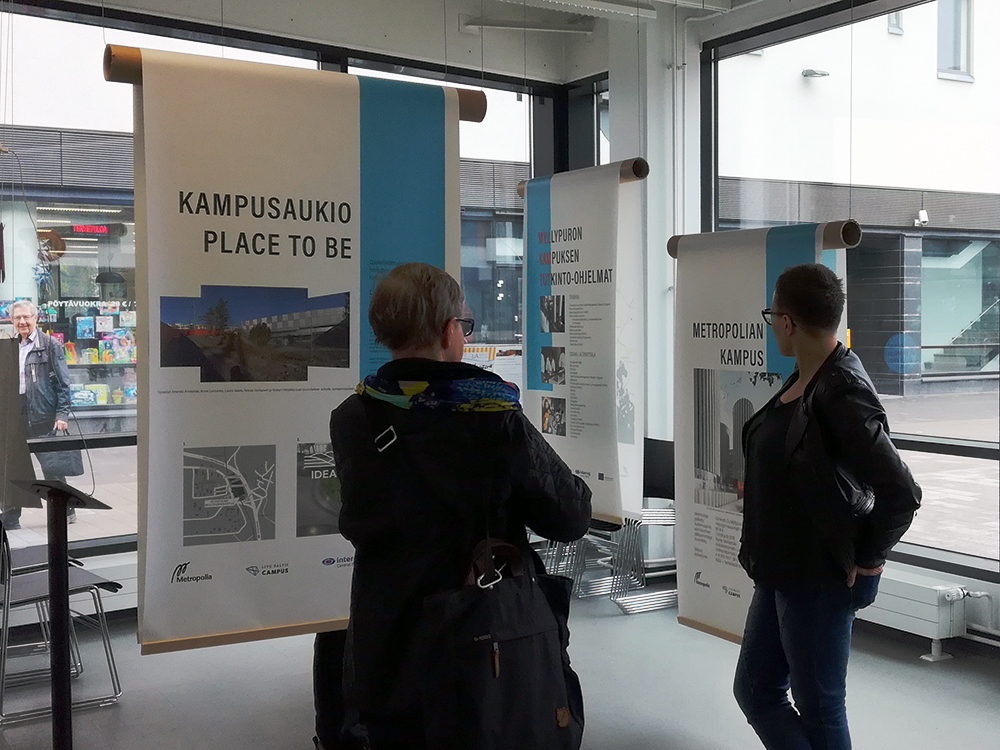 – one empty space
– enthusiastic and curious students, personnel and directors
– enthusiastic and curious neighborhood
– programme to lure people in and meet each other (also, having plenty of coffee available can be recommended)
– small PA system, screen/projector, chairs, tables
– campus visions and and plans visualized to be shared and discussed
– some means of documentation and making notes
– some can do attitude

Let simmer for two weeks or other time period perceived suitable, feel free to stir and add mixers according the need and intuition.

Visuals and interiors of the Pop-up Metropolia Campus were designed by Sara Grönberg, who is graduating this spring from Metropolia’s Degree Programme of Design / Interior Architecture.