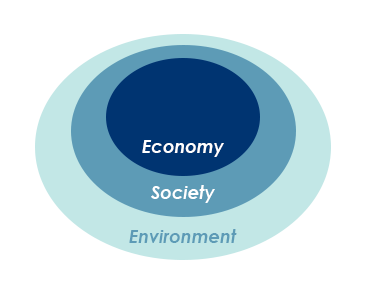 While sustainability (Fig. 1) can be seen as an ever-refining process, rather than an end product in itself, resilience can be seen as a way of thinking for working towards sustainability, itself a constantly evolving process. The concept of resilience refers to the capacity of a system to recover after change while maintaining its basic functions. It also deals with how systems change, and can inform on how the changes, whether social or ecological, relate to sustainability.

The concept of resilience is increasingly used in the contemporary sustainability discourse and is often defined as having three interrelated characteristics: (1) the amount of change the system can undergo and still retain the same controls on function and structure; (2) the degree to which the system is capable of self-organization; and (3) the ability to build and increase the capacity for learning and adaptation (http://www.resalliance.org/).

Resilience theory holds communication between people with different knowledge and perspectives to be centrally important for navigating change. Communication improves our ability to identify problems and solutions, as well as opportunities for collaboration that would otherwise have been overlooked. As identified by the Live Baltic Campus Project (LBC), universities are particularly well suited for taking the lead in the transformation of cities and societies towards increased resilience and sustainability. They are hubs for knowledge production and critical thinking, while also rich in resources such as finance, infrastructure, and social connections. A study tour to the Netherlands in March of 2016 provided a number of examples of how university campuses can contribute to urban transformation, while lessons were also learned about elements missing in the attempts to increase urban resilience and sustainability.

Delft University of Technology: Crisis as trigger for change 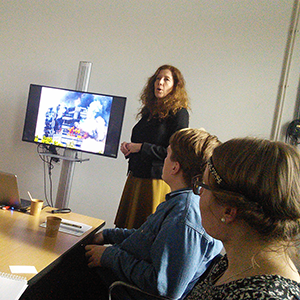 Inherent in the notion of resilience is that crises or change always will happen sooner or later, whether humans like it or not. The question is rather how we deal with, adapt to and make use of crises and change. Associate professor Alexandra den Heijer at the Faculty of Architecture and the Built Environment, at Delft University of Technology, told us of a fire in May of 2008 that burnt down the new 13-story Faculty of Architecture Building at the Delft University of Technology (TUD). Although all occupants were safely evacuated, the whole building collapsed. In the spirit of participative planning, students and faculty members together came up with innovative solutions for how an old, previously thought outdated building could be designed and restructured to house the Architecture school – a co-creation process brought about by the fire. The process spurred the realisation of a different idea of what a campus could be – an inclusive, historically anchored multi-functional environment, or as Alexandra phrased it: the campus of the future is a city.

Amstelcampus, the new main location of the Amsterdam University of Applied Sciences (AUAS), has been remodelled so that business, students and leisure activities meet. Providing all services within reach of the students and employees of the University, the campus gives new life to an area that was previously quite devoid of activities. The campus itself, and the new boulevard and train station together provided an example of spatial connectivity; infrastructure that connected the urban social-economic functions with each other and the larger urban landscape. While the campus now is a more active place than before the remodelling, it also contributes to improve the greater urban area, which was nicely expressed by the slogan: ‘the city as a campus area’. This is taking the thoughts from Delft to a larger scale by making the campus an interactive part of the city. From a resilience perspective this is quite interesting as exchange is one of the key elements in resilience building.

Brainport Eindhoven Region clearly demonstrates that a university campus is not only important for educating individuals but can be used to facilitate the building community resilience. Seeking ways to get out of the financial catastrophe and high unemployment following industrial restructuring in the 90s, the Eindhoven region initiated an intense collaboration between government, industry and research, led by the Technical University of Eindhoven (TU/e). The Brainport Foundation was subsequently founded in 2005, and Eindhoven is today a top technology region.

In the context of social-economic resilience building, the Brainport philosophy in which high-tech and design go hand in hand with top-quality manufacturing and entrepreneurship, is an example of how university-driven initiatives can be key for supporting open innovation, for sharing knowledge, and to multiply knowledge. However, it also shows the importance of existing networks to help speed up transformations through collaboration. In the case of Eindhoven, the technological knowledge and the existence of world-leading companies like DAF and Phillips have been strong contributors to the success of the regions’ transformation. The combination of building on existing infrastructure and knowledge but constantly seeking new ways of applying and developing them contributes to a more dynamic and resilient region.

University campuses can also become hubs for resilience building at the individual level, as demonstrated in the presentation given by Wim Koch, Director of the TU/e Sports Centre Eindhoven (SSC). The SSC offers all students and staff of TU/e, Fontys Hogescholen Eindhoven and Design Academy Eindhoven facilities for and access to 70 different sports activities for recreation, health and relaxation.  The example demonstrates how the wellbeing of the people on the campus  is interconnected with intellectual, emotional, social, and physical development.

The Eindhoven University of Technology also supports students individually to strengthening skills where needed, for example giving presentations in front of audiences, and organizing and leading groups and meetings. Resilience building is not only about the built-up environment or planning and design processes; it all begins with health, wellbeing and development at the individual level.

Resilience thinking teaches us that any system – its components as well as their interactions – is constantly changing, and so is the larger environment in which it is embedded. Rigid structures and connections in systems cause systemic vulnerability, while flexibility builds resilience. The remodelling of the Erasmus University Rotterdam dealt with several issues of growing importance in cities across Europe: strategies to deal with old buildings, integrating new designs, and meeting not only current but also future user demands as well as changes in the natural environment. The aims were to make the campus more attractive, resource efficient, and adaptable to social-ecological changes. Actions included the removal of buildings from the 60s; redesign of the spaces between buildings to create a more open, bright, and green campus landscape with ecosystem-based solutions for dealing with current and increased water flows; and the construction of a new building with flexible interior design capable of meeting both current and future yet unknown user demands.

While we saw various examples of effective resilience building in the socioeconomic sphere, we missed the social-ecological-financial systems view given in Fig. 1. Failure to address environmental issues and un-explored opportunities for integrating ecological elements in the built-up environment leave areas vulnerable, in terms of their capacity both to support human health and well-being, and to deal with environmental changes. The environment, and our stewardship of it, is central to resilience building; it has tie-ins with everything from individual well-being to societal development.

Universities are uniquely situated to shift discourses, behaviours, policies, economy and politics. Realising this potential is, at least in part, a question of actual campus design, where connections and alternative options can be envisioned and made digestible to relevant sectors – not least the public. The campuses visited in the Netherlands show how universities, at least under certain social-ecological-financial circumstances, can function as catalysts for change. They also demonstrate the great need for more innovative thinking particularly around green infrastructure, and for greater acknowledgement of the inter-connectedness of systems, on local as well as regional scales.
Authors: Johan Colding, Stephan Barthel, Maria Schewenius, and Erik Andersson