Campuses for smarter, better Baltic cities? Notes and discussion from the EUSBSR Forum 2017
Back to Blog

The Forum was preceded by Baltic Development Forum Summit – a separate but thematically related event. The Summit lined up two panels of speakers focused on business: ‘New business models for sustainability’ and ‘Connecting digital start-up ecosystems in the Baltic Sea Region’. My takeaway from this is that sustainability has entered the ‘centre stage’ in the Baltic Sea Region and will be part of the conversation for some time to come. The same could be said of digitalisation – although the panelists admitted that digital business ecosystems in the Region remain remarkably un-connected, this is probably where potential lies.

Another major part of the Summit programme was the presentation of the Political State of the Region Report 2017. The report analyses the impact on the future shape of Europe and the Baltic Region of paradigm-shifting, global-scale events – Brexit and the election of Donald Trump. The impacts will be and already are profound; interestingly, Latvia was singled out as the country with most at stake with Brexit, due to trade and immigration. The takeaway from this is the need for the Baltic Region to have its own distinct voice, to come up with multi-lateral initiatives that would be of interest to other EU countries, in particular its reluctant leader – Germany. The panelists pointed out that this united voice is lacking at the moment.

From this big-picture vision, the EUSBSR Forum took off with no less visionary keynote speeches by German Foreign Minister Sigmar Gabriel, former President of Finland Martti Ahtisaari and Ericsson’s Head of Research, Sara Mazur. One of the key messages of president Ahtisaari was to remember the youth as one of focus points of the Baltic Sea Region collaboration, and he specially called for the collaboration between universities to achieve this. 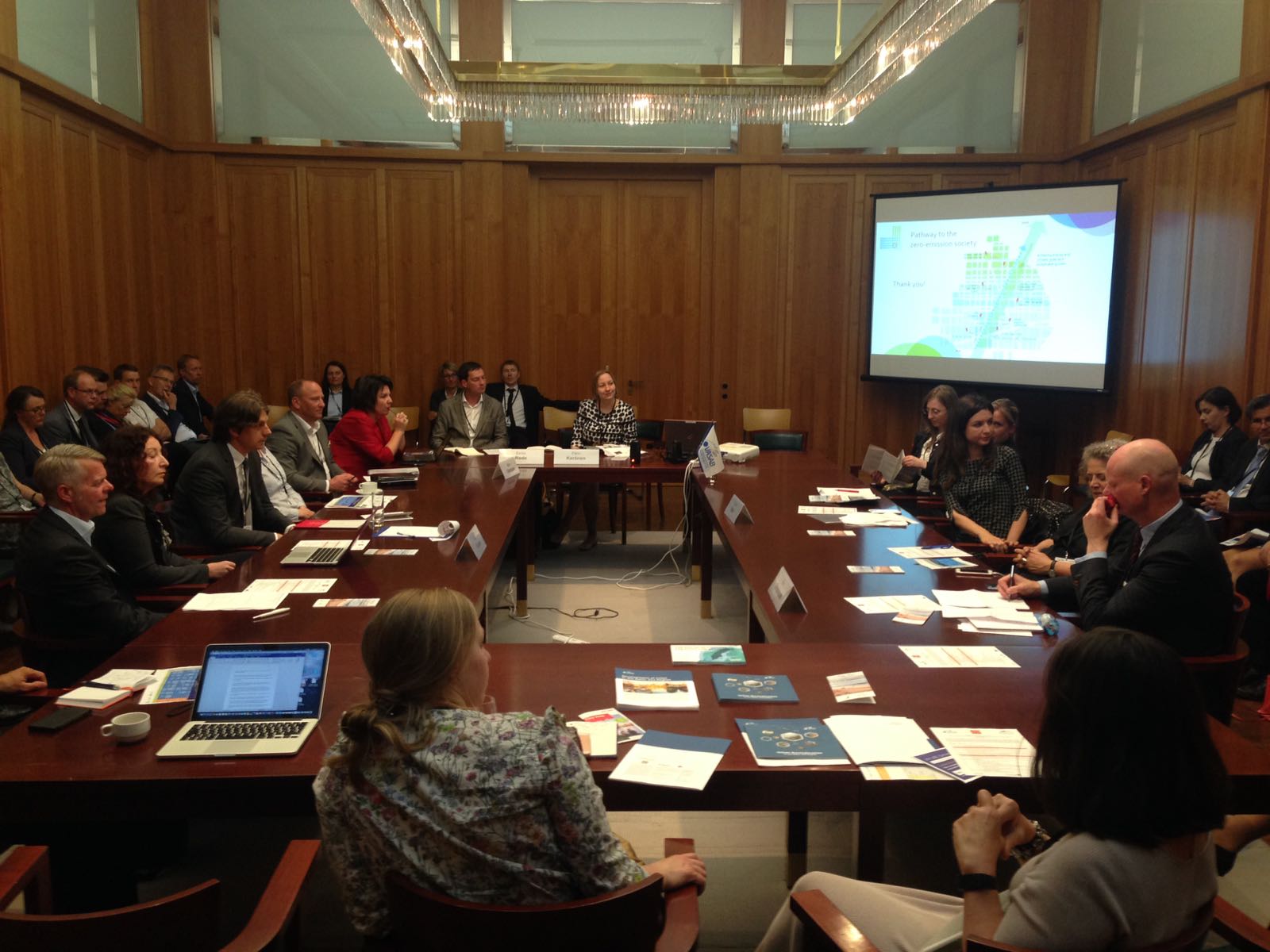 Further on, it was our turn to present Live Baltic Campus project and our learnings from it – at the thematic seminar titled ‘Transformation to the Baltic Smart Cities’ hosted by HA Spatial Planning (represented by VASAB). The seminar was well-attended, with some 40 international participants from various BSR countries, public and private sector alike. Moderated by Giulia Maci, who runs Urbego – a ‘collaborative urban impact’ platform, the seminar approached the topic from various perspectives. 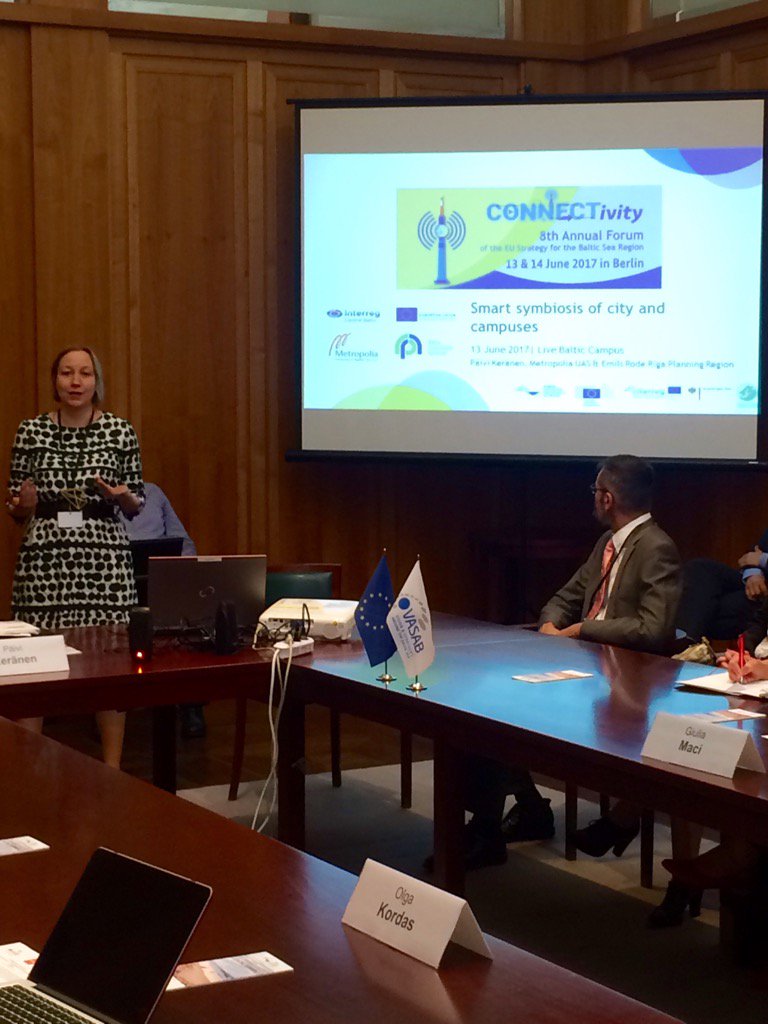 Our joint presentation was titled ‘Smart symbiosis of city and campuses’. Päivi presented the learnings from the Live Baltic Campus collaboration thus far: “Campuses can be viewed as one of the interfaces towards urban development – they contribute to urban futures in many ways starting from development partners and scenario makers to testing grounds, and providers of new knowledge. And, not to forget either, is their in forging the coming urban cultures.”

In Helsinki, Myllypuro campus is very much seen as an act of urban development and with Live Baltic Campus, Metropolia UAS and City of Helsinki have had great opportunity to work together in realising its full potential. In addition, the project has already succeeded to plant seeds for long-term collaboration to follow-up and study the effects and transformation future campus is estimated to have for the surrounding neighbourhood.

Emils focused on the takeways from Live Baltic Campus, in particular the case of Riga, asking: what can we learn from the experience of other cities? What are the elements of the knowledge city? What can we do to go from ‘transferring knowledge’ to knowledge that helps in ‘transforming’ our knowledge places? These questions will form the base of the upcoming Livable City Forum Riga in October.

From the feedback we received it seems that the topic of campuses in the city is of importance elsewhere in BSR and EU. Based on the discussion, however, the theme is not yet sufficiently explored in BSR community, making Live Baltic Campus truly important as a trailblazer. Even the word ‘campus’ can be misleading – for some it paints an image of remote area disconnected from the city, in stead seeing the potential for vivid living community located within the city structure and interconnected to its services, we have learned to aspire for in the Live Baltic Campus pilot cases. Thus, in order to avoid misconceptions, a special care should always be taken to explain and describe what we mean by campus.

The Forum continued for a second day, exploring themes such as Blue Growth and Transport in its plenary sessions, and a myriad of topics in more than 30 focused seminars.

We went home with the hope that our project has made at least a small step towards mutual understanding and shared competitiveness of universities and cities in the Baltic Sea Region.