The Livable City Forum Uppsala was opened by Deputy Vice-Chancellor Anders Malmberg, professor of Economic Geography at Uppsala University, which lead us directly to the session devoted to the roles of a university in a city and in society, starting with the local background. We heard about the future Ulleråker township with 7000 new apartments directly to the south of Polacksbacken area and the upcoming ITC centre (Ångström Etapp 4). Then, we changed from the future to the past; stepping back 539 years in time we looked at relationship between Uppsala University and Uppsala throughout time, e.g., what was previously found at the various floors of the Carolina Rediviva university library. Indeed, this building, which is widely visible in Uppsala, was a kind of Science Centre for communication between the university and the town. Then, after a well-deserved coffee break, we traveled back to the future and heard about plans for a new Science Centre. 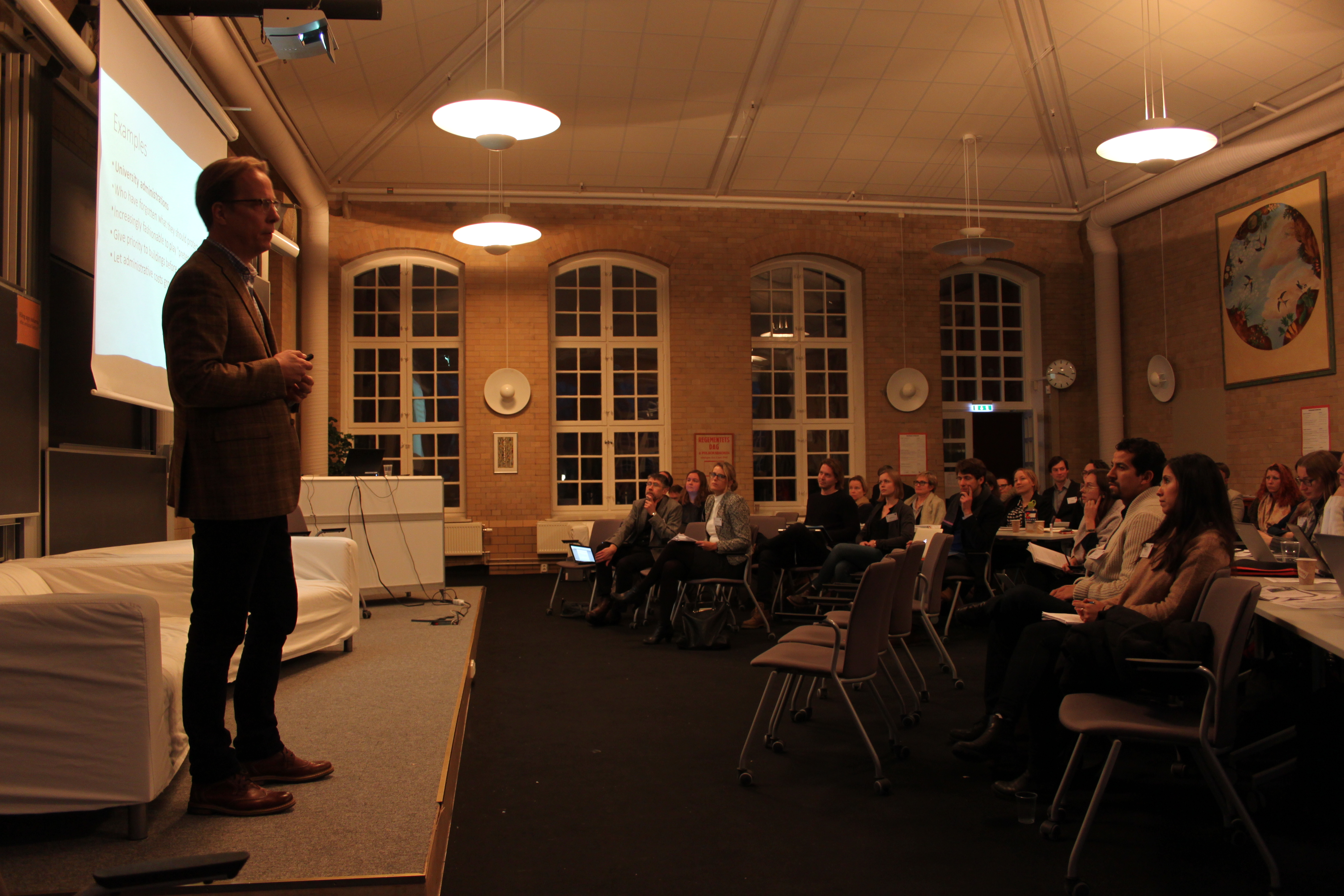 But what is a university? Academic freedom and the importance of unconstrained researchers in the discovery of new knowledge were discussed, and we listen to the five key things that a university does to help society think about, prepare for and create the future. We ended by bridging research with innovation, and academia with industry, showcased with Uppsala examples such as the AIM Day concept. And despite a very intense session we concluded with a panel discussion. 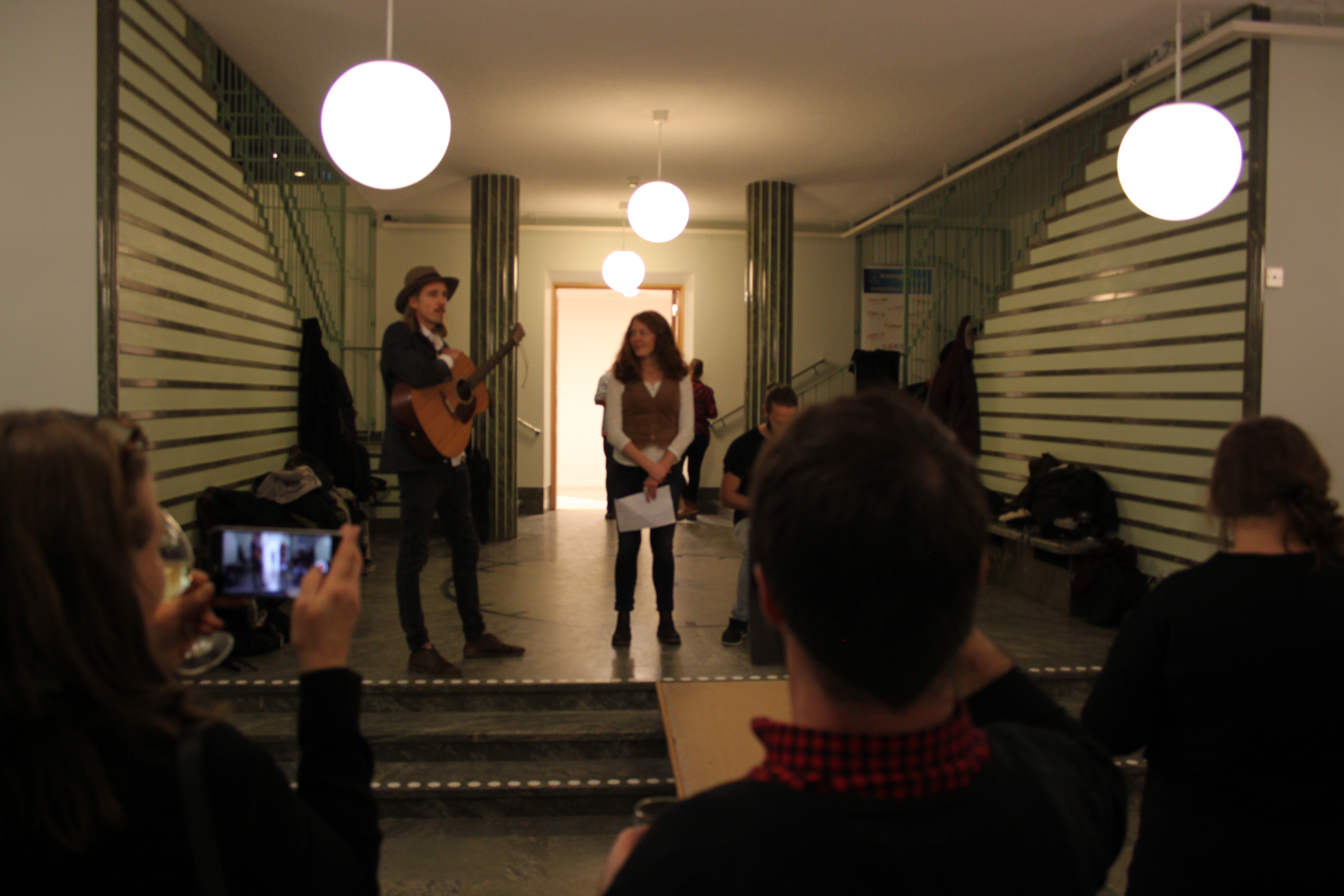 The first day of the Forum had come to an end and the last point on the program was the evening mingle at the ‘Sustainability Hub’. The evening was opened with a music performance connecting to the current state of the world. After a short introduction to the space, everyone was invited to contribute with ideas on names for the space but also to enjoy themselves with some food and drinks after a first intense and interesting day at the Livable City Forum Uppsala.

Tuesday morning started with a session on the presumptions for successful design of creative, lively and open urban milieus. Johan Jansson, associate professor at the department for social and economic geography of Uppsala University, talked about creativity as such and the paradoxical intention to try to plan for the unplanned (i.e. creativity). Then Jan Amcoff, also associate professor at the same department, talked about the new patterns of retail localization in Sweden and the forces that might be behind these changes. The two presentations were followed by questions and discussions involving the audience. 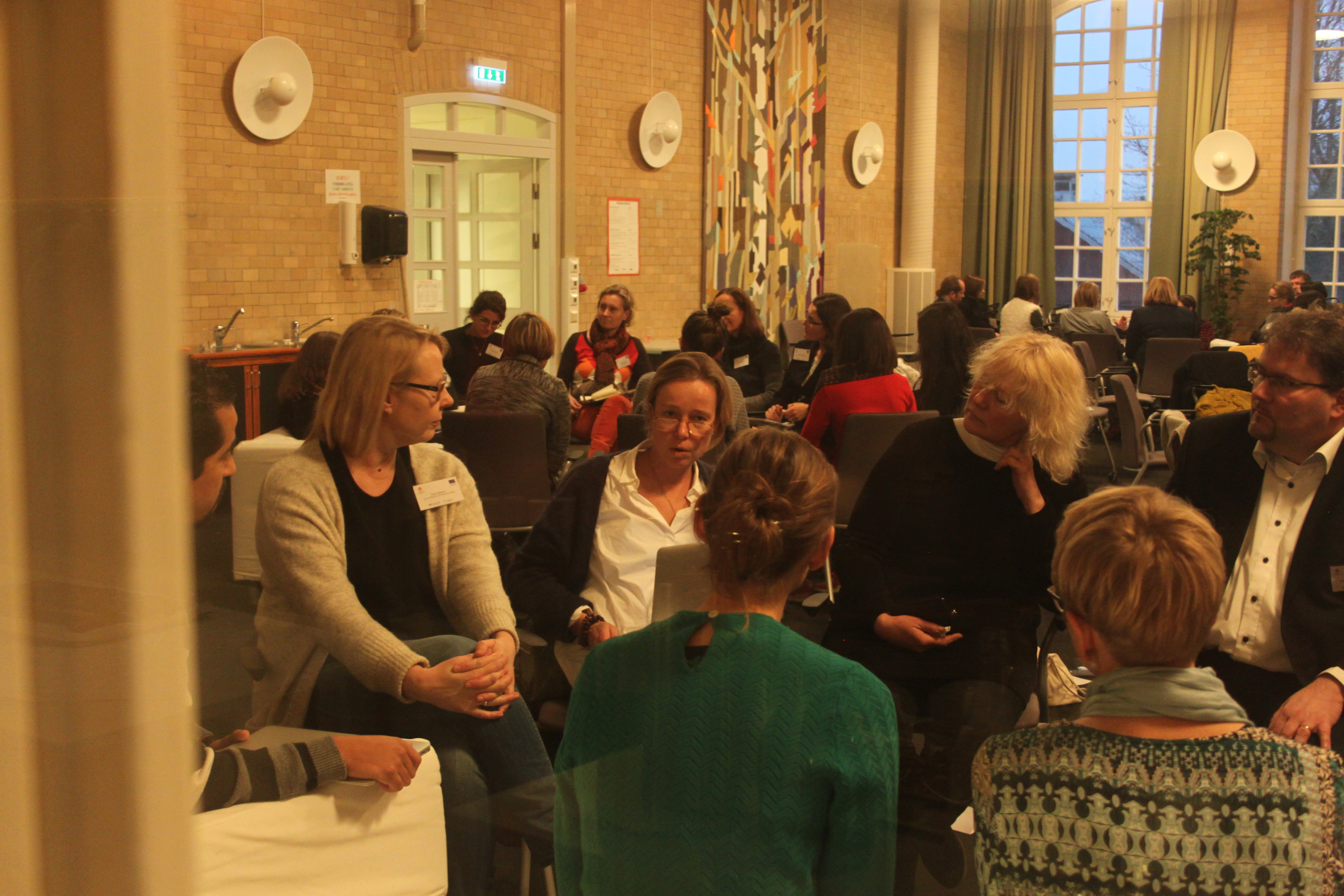 Coming back after an enjoyable lunch, the third session of the Forum began around the topic of “Exploring Participatory and Sustainable Urban Design – reshaping our campus and city in the face of global challenges”. Four short presentations of local cases in Uppsala where followed by a more in-depth discussion in smaller groups between the participants and the presenters. 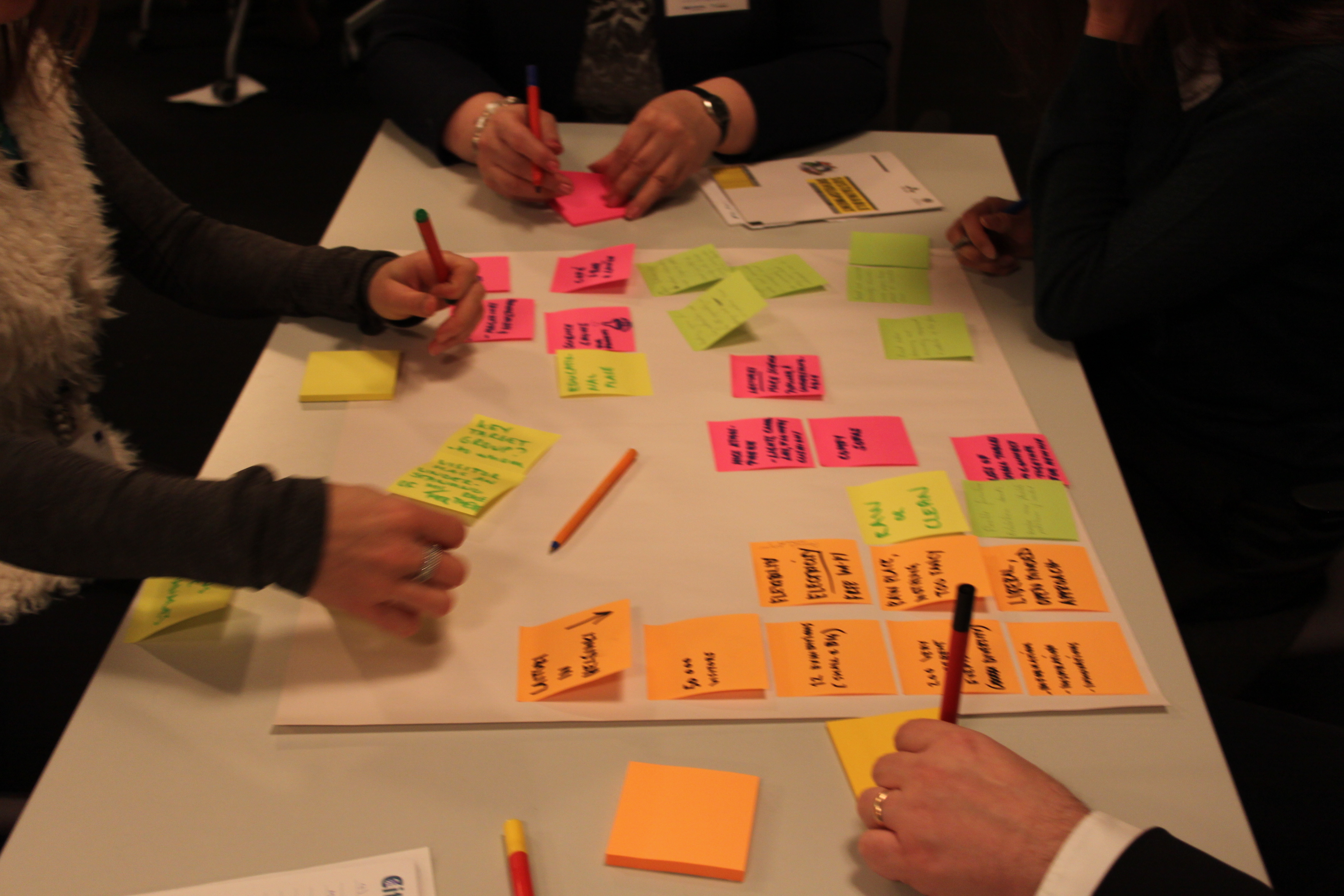 After these discussions the second part of the session explored the possibilities of creating a new kind of physical space for participatory and sustainable campus/ urban development. The discussions focused on the ‘Sustainability Hub’ that was the venue for the evening mingle the night before.

The second day of the Forum concluded with a guided tour through the light exhibition “All lights on Uppsala” followed by a delicious dinner at Norrland’s nation, one of the student nations in Uppsala. 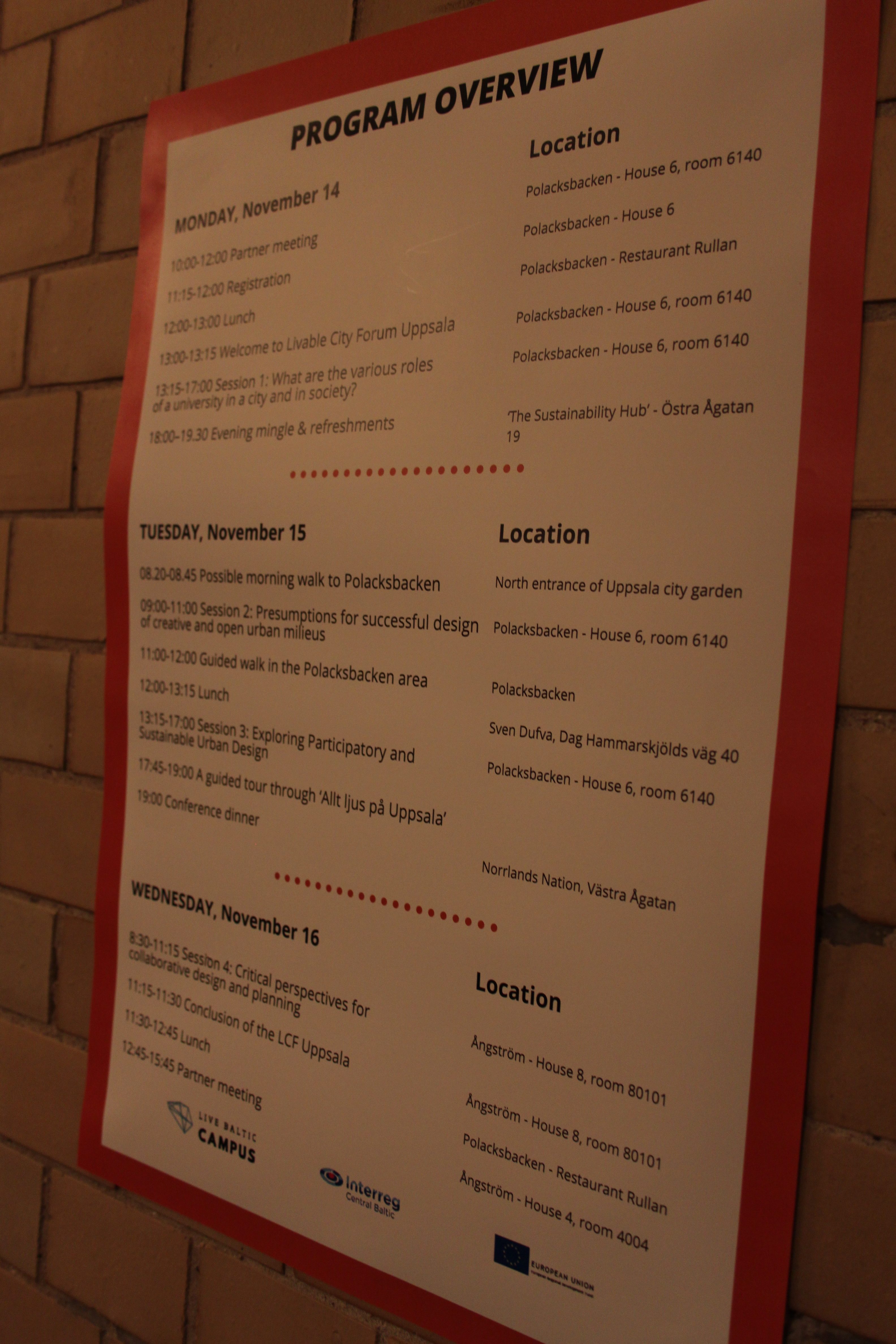 The final day of the forum focused on the challenges of collaborative or participatory design and planning. In five different presentations researchers from Stockholm University and Uppsala University presented their research on different aspects of bringing in participants and stake-holders in planning, all starting from the assumption that improvement begins with careful analysis of institutional, cultural and structural challenges. The individual presentations were followed by a panel-discussion. Though most of the panelists agreed that participation and collaboration is crucial for the ability to cope with complexities of contemporary planning, they also pointed to the importance of understanding the difficulties and inherent challenges in terms of normative tensions, power asymmetries etc. “If we believe participation is non-controversial and easy, only because everybody talks enthusiastically about it, then it is probably doomed to fail”, it was argued.


How was the Uppsala Forum – watch a video!
Check out also what participants thought about the Forum!