What was Pop-up student space test week about?

A big test space USKO of Facility planning of University of Turku was in our use for a week during 3–7 April 2017. It was furnitured with different modern and innovative model office chairs and tables, and enabled multiple uses. It located in an one-storey old wooden house called Matthias, in between the University Hill and the Lower University Campus of University of Turku, next to a vivid light traffic route crossing the campus.

The Pop-up student space was offered free of charge for students in the universities or in the universities of applied sciences in Turku. From Monday to Wednesday it worked open doors, and from Thursday to Friday pre-booked for personal use or for groups to meet and work. There was room for about 20 persons at a time.

During the week we aimed to collect experiences and information from the users, where and what kind of student spaces there should be on the higher education campus in Turku? The aim was also to find out, if there is an actual demand for easily accessible student spaces in different places on the campus, no matter what is the home institution.

Our solution was actually more like a free temporal student lounge on campus and not a flexible shared space. 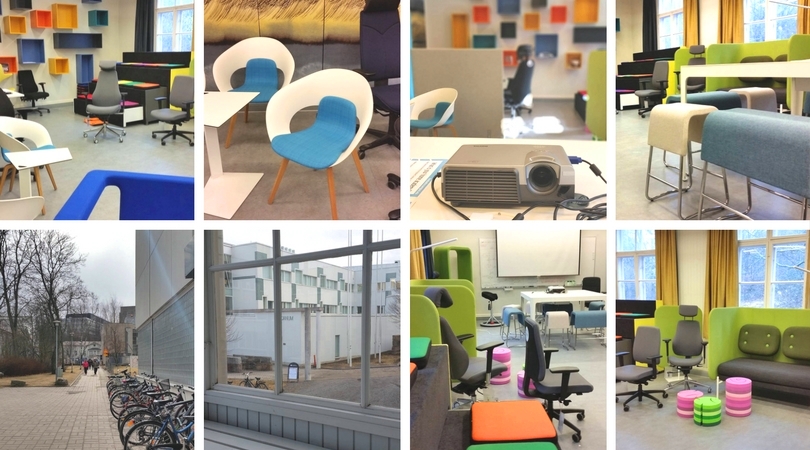 During the open doors, there were only two exchange students, who had noticed our flyer nearby in the Faculty Library and came to look at the space. They told us that they had recognised the building from the picture, and came to check it out.

During the pre-booked days, there was only one student union board meeting on Thursday.

However, reactions into our marketing efforts were positive. Feedback from higher education teachers and other staff with whom we were directly in touch to reach bigger student groups was supportive. And also some of our student contacts reported that they had received answers that “this is what is needed”, when they had forwarded the message.

It seems that we were close to the right idea, but didn’t have ability yet to convince people of its value.

…but test week costs were minimal and taught a lot!

The week offered us some great lessons.

We should know students’ daily activities and patterns better on campus: where they move, where they stop, where they wait, and where they work? There was nothing familiar for students in advance in Matthias, no lecture halls or cafes etc., and the building itself seemed to be aside, even if it was only dozen meters from the vivid light traffic route.

If the students were to come to the Pop-up student space with a purpose and in spite of the space and location, it demands effective and targeted marketing in good time before the test week. We did for example direct marketing to different student unions, but it did not work as wanted. Another opportunity is to organise super interesting opening programme to make students to come, and then spread the word and come again. One week is not too long time to reach a tipping point anyway!

To invite spontaneous visitors, it was not appealing and informative enough. Students could not directly see the premises from outside, and how nice it was. One option would have been to have a sales desk in the vivid lobby of the adjacent building, to market the space for students who are passing-by and to tell more about the opportunity in person.

There was a lot of competition to offer the same solution as we did in adjacent buildings, to keep a short term break, kill time and charge devices, and they seemed to us even a bit crowded. But changing the building for a short time seems not to be a solution for students.

Are we getting the problem right?

An essential aspect of creativity is not being afraid to fail. – Dr. Edwin Land.

An essential aspect of any test is test users. We learned that it would be good to have certain amount of committed test audience in advance, and maybe do it even as beta testing first, before opening at all into wider audience. We trusted too much that students would get interested while they see a flyer or stand on their normal routes on campus, and would pop-up to look over.

Our solution was to offer a free student lounge during one week – what then? It connects to themes as temporary use, spontaneous use, and pop-up use – something that starts to lack charm of novelty by now. Maybe in addition to the free space, students would have needed something more personal, unique and approachable. Our “story” was not maybe strong enough. We were also discussing about how to serve the millennials in the near future on campus?

What actions should take place as a result of the experience? To make A/B test, we need to define more carefully, what was this A variant all about, and what would the B be, if we want to have drastically different variant. Or should we continue with an A#2?

Problem and solution did not meet, and both need to be modified. Testing is still much more effective than trusting on gut feelings.

A new initiative allows students to test their business ideas by setting up shop and gauging interest before going to market. However, students at Surrey Business School are successfully starting up in retail with the help of the newly-launched incubator space , Studio. The results speak for themselves.